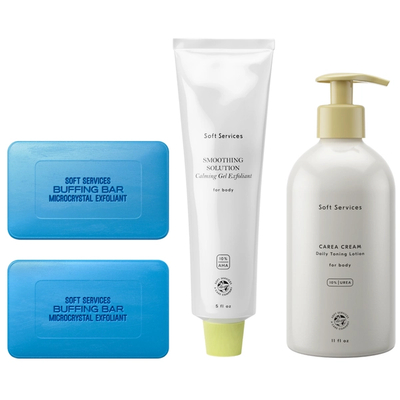 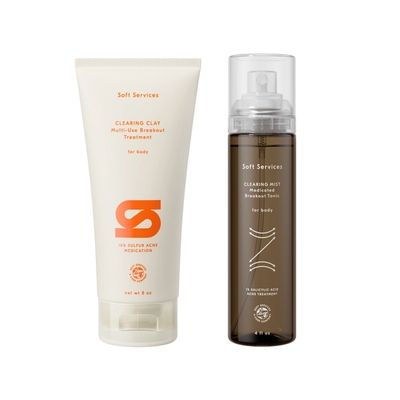 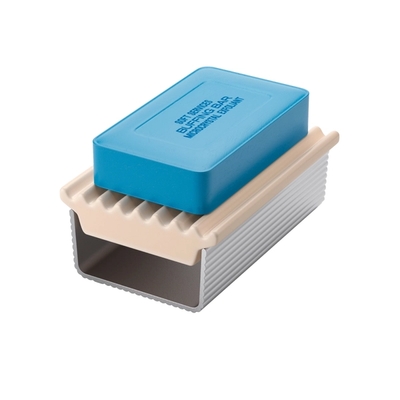 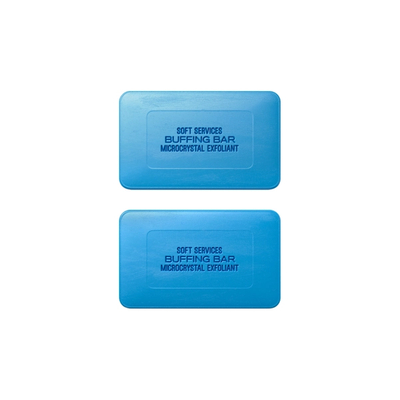 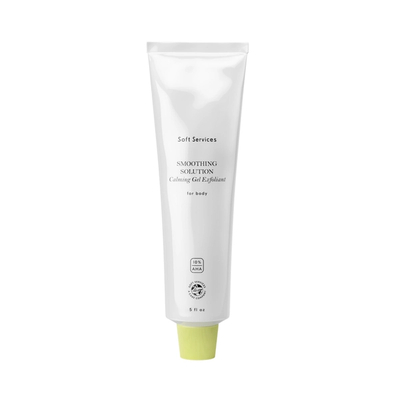 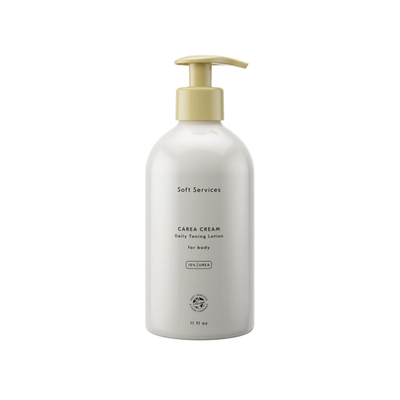 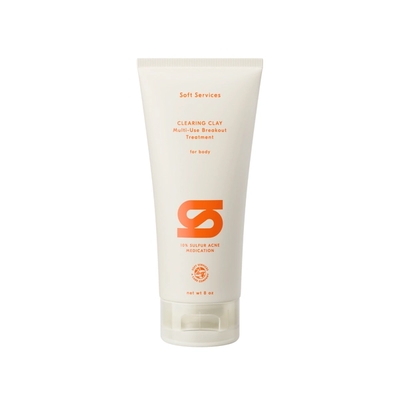 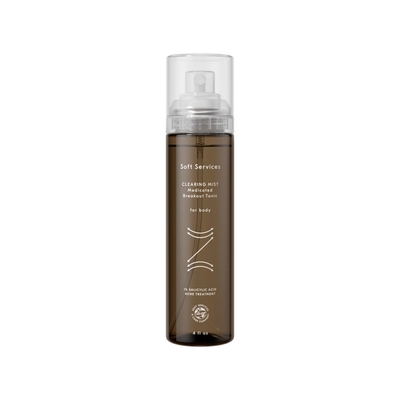 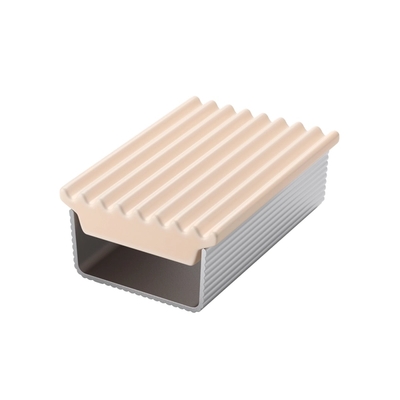 Visit Homepage
makes treatments for the skin on your body.
Shop Soft Services

Is this a gift?

We can send your gift recipient an email letting them know that something special is coming, along with tracking info. Please fill out the fields below. Example here.

A harmless skin rash caused by an excess of naturally occurring yeast that shows up in splotchy patches on the body, usually a few shades lighter or darker than someone’s normal skin tone.

An area of skin, maybe a dot or a patch, that's darker or lighter than its base tone.

Usually caused by an overgrowth of yeast on the skin. Can be red, itchy, scaly.

On This PageWhat Is Tinea Versicolor?What Causes It?How Can I Treat It?What Prevents It?CitationsMore Information

What is tinea versicolor?

Tinea versicolor (also known as pityriasis versicolor) is a harmless skin condition that causes discoloration in rash-like splotches that are either white, pink, or a few shades lighter or darker than someone’s base skin color—hence the term “versicolor.” It’s caused by the overgrowth of a yeast that’s always living on the skin called malassezia.1 Malassezia is naturally part of the body’s biome, but too much of it can cause dandruff, psoriasis, and tinea versicolor. Because warmth and moisture on the skin helps fungi grow, tinea versicolor is extremely common in tropical, humid climates2 and among athletes (all that time in sweaty clothes can cause a range of fungal issues).

Tinea versicolor patches are most commonly white, especially in people with darker skin tones, because the fungus travels under the skin, producing azelaic acid, which bleaches and lightens the skin. The rash may first appear gray, pink, or red and then end up white, but it varies from person to person.3

Common areas include the upper arms, chest, and back. Much less commonly, it can affect the inside of the elbows, groin, or even the face. The rash may spread, but it’s not contagious. Patches can be flat or raised and aren’t usually painful or itchy, but they can be dry, flaky, and appear scaly. Tinea versicolor itself doesn’t change color in the sun, but the rash can become more visible as the skin around it tans, which is why the American Academy of Dermatology recommends avoiding sun exposure while treating it.4

After the rash goes away it often leaves behind areas of light skin. These are stains where the previous inflammation occurred. Eventually those stains will fade, especially if you stay out of the sun, but it could take months or years, meaning the skin might still look discolored even after the excess yeast is taken care of, which can be very frustrating for some patients.5 And if that’s not frustrating enough, it can show back up again, especially in humid weather. In one study, 53 percent of people who had treated their tinea versicolor saw it return one to four times, with 14.7 percent experiencing more than four returning episodes in one year.6 Because of that, treatment might need to be ongoing to keep the yeast on the skin in balance.

If you think you have tinea versicolor, have a doctor check it out; they can often identify it just by looking at it, but there are also special microscopes that confirm the diagnosis (and fun fact, doctors identify tinea versicolor under a microscope by its distinct pattern, which they call “spaghetti and meatballs” because, in a way, it looks like it).7

Tinea versicolor doesn’t usually go away on its own, but it’s very treatable with a few over-the-counter antifungal shampoos and creams, and there are prescription options for more severe cases.8 The important takeaway is: tinea versicolor does not cause any significant harm to the skin and should not have an effect on skin aging.

Can I get a tattoo over tinea versicolor?

What is the difference between tinea versicolor and vitiligo?

Tinea versicolor is caused by an excess of a yeast that lives on the skin called malassezia furfur, which thrives in warm, humid conditions, whether that’s a tropical climate or a warm, sweaty post-workout body. Malassezia also tends to live on dead skin and is attracted to oil, whether that’s the naturally produced oil (sebum) on the skin or oily lotions and creams.

When there is more sweat and oil on the skin, it creates an environment that allows for yeast to grow to higher than normal levels. This is why the rash is more common in hot, humid months. Because the body produces more sebum during adolescence during all those exciting hormone changes, tinea versicolor is more common in young adults, while the majority of cases occur in people aged 10-30.9

In certain cases, pregnant women are more susceptible to it.10 Certain immunocompromised people can be prone to tinea versicolor because the body isn’t as readily prepared to fight it, including those with diabetes, those who have had an organ transplant, or who take medication such as corticosteroids.11 In those instances, tinea versicolor may need a slightly different course of treatment, so it’s important to talk to your doctor about the treatment plan that makes the most sense for your body.

How does tinea versicolor affect skin of color?

How do you treat tinea versicolor?

Treating tinea versicolor is similar to treating dandruff and fungal infections like athlete’s foot. In fact, they’re all caused by the same thing: excess malassezia, a naturally occurring yeast on the skin. But it’s important to know that because malassezia is always present on the body, there is no permanent “cure” for tinea versicolor. Like acne, it can be a chronic condition that might require ongoing maintenance treatment to manage the symptoms.

The first step in treating tinea versicolor is dealing with the patches superficially, using a chemical exfoliant like glycolic or salicylic acid to get rid of the topmost layers of skin (that’s mostly dead skin anyway, you won’t miss it). Malassezia lives on dead skin and grows in oily skin, so clearing out that environment will hopefully stop the rash from growing any bigger.

Next, you can kill the fungus itself by using a dandruff shampoo as a body wash on the patches (due to complicated FDA label requirements, dandruff shampoo labels can’t claim to treat any medical conditions other than dandruff, seborrheic dermatitis, or psoriasis).12 Look for over-the-counter antifungal shampoos containing selenium sulfide with at least a 2.5% concentration, or shampoos with pyrithione zinc or ketoconazole. If those don’t work, a dermatologist can prescribe a stronger anti-fungal shampoo with fungus-fighting ketoconazole. To treat an active rash, leave the anti-fungal shampoo on your skin for at least ten minutes, like a mask, before rinsing off. The AAD recommends doing this daily for a week, or until the rash subsides.13

For maintenance, continue to use it weekly, or monthly, as part of your shower routine: try suggests applying the shampoo, then singing the alphabet once through before rinsing. This allows enough contact time on the skin for the active ingredient to do its job. Start by using it once a day and then slowly decrease usage once you notice results—when the patches become less dry, flaky, and raised.

You can also use over-the-counter antifungal ointments with miconazole, clotrimazole or terbinafine. Topical antifungal creams should be applied twice a day to the affected areas. Over a course of several weeks to months, the skin’s normal pigment usually returns.

How long does it take for skin with tinea versicolor to return back to normal?

How do you prevent tinea versicolor?

You can prevent tinea versicolor the same way you treat it by occasionally showering with antidandruff shampoo used as body wash, especially if you’ve had it before. You can also prevent it by keeping your skin as cool and dry as possible, which might be easier said than done depending on whether you live in Brazil or Portland. Humidity and heat help yeast thrive, so people who live in colder, drier climates don’t have to worry about tinea versicolor as those in the tropics.

That said, a two-hour hot yoga class can be just as triggering for tinea versicolor and other fungal infections, so don’t wear those sweat-drenched bike shorts to run errands for two hours after working out. And that applies to all sweaty scenarios: Change out of damp clothes immediately, or dry the skin as much as possible, to prevent a range of skin conditions (and because it’ll just feel good). Wearing loose, breathable clothing can minimize sweating and help stave off a tinea versicolor breakout.

Minimize sun exposure, because it can be a trigger for tinea versicolor; if you’re going on an all-inclusive Cancun vacation next month and fear another flare-up, you can use anti-fungal shampoos two weeks before the trip to keep the yeast on your skin from building up.14 (And make sure to wear sunscreen and cover up as much as possible to avoid it once you’re at the swim-up bar.)

Sun exposure also prolongs the time it takes the skin to return to its normal base tone. “Avoiding sun exposure or a tan is the best way to help hide this pigment change,” says Dr. Kellie Reed, a board-certified dermatologist at Westlake Dermatology in Austin, Texas. “The darker skin surrounding the areas of prior rash will make it appear more obvious.”

If you’re prone to tinea or have had it a few times, your doctor can also prescribe antifungal oral medication such as itraconazole [Sporanox] or fluconazole [Diflucan] that you can take as a preventative.

Why does my tinea versicolor look worse after tanning?

How does tinea versicolor affect skin of color?

What is the difference between tinea versicolor and vitiligo?

How long does it take for skin with tinea versicolor to return back to normal?

Why does my tinea versicolor look worse after tanning?

Can I get a tattoo over tinea versicolor?

Sign up for 10% off your first order as a part of our anniversary celebration.